1) The Home Minister Amit Shah has launched the ‘Ayushmaan CAPF’ Scheme health cards at the national level in New Delhi. The scheme is a joint initiative of _________________

3) The Ministry of Rural Development has signed a MoU with which company to empower local businesses and SHGs?

4) The Indian Railway Catering and Tourism Corporation has joined hands with which company to provide passengers with greater trust in communication?

5) Who is the Chairperson of Government constituted  20-member Empowered Group of Secretaries to monitor the development of the PM Gati Shakti National Master Plan?

6) The Indian Navy has received its first P15B stealth guided-missile destroyer named “Visakhapatnam” (Y 12704). The destroyer was built at which Dockyard?

7) The CCI has approved acquisition of 100% shareholding in Exide Life Insurance by HDFC Life Insurance under which Section of the Competition Act, 2002?

8) Which state government has launched the ‘Uttam Beej portal’ to improve the farmers manufacturing and revenue?

9) Dharmendra Pradhan has launched Bhasha Sangam Mobile App. The App’s every day usage in how many Indian languages?

10) Which among the following organisation has launched a ‘Whistle-blower Portal’?

(a) Solar Energy Corporation of India

(b) Housing and Urban Development Corporation

11) Who has been listed as the most generous philanthropist, according to the Edel Give Hurun India Philanthropy List 2021?

12) A New Book Titled,“John Lang: Wanderer of Hindoostan, Slanderer in Hindoostanee, Lawyer for the Ranee” has been authored by whom?

14) Whom among the following Indian cricketers have given honorary life membership by the Marylebone Cricket Club?

15) Who has won the 5th Rujna Zora chess tournament in Serbia?

16) Ahmad Shah Ahmadzai  passed away recently. He was the prime minister of which country?

The home minister has launched the scheme by handing over the Ayushmaan card to personnel.

The CAPFs should take care of security of the country without any worries and Narendra Modi Government will take care of their families, and the scheme has been designed to cover all serving personnel and their dependents of the seven Central Armed Police Forces.

The scheme is a joint initiative of the Home Ministry, Health Ministry and National Health Authority (NHA).

Approval has been given for procurement of twelve Light Utility Helicopters from HAL and Lynx U2 Fire Control System from BEL to enhance detection tracking and engagement capabilities of Naval warships.

Approval has also been given for Mid-Life Upgradation of Dornier Aircraft from HAL to increase Naval capacity of coastal surveillance.

All of these proposals are under Make in India with a focus on design, development and manufacturing in India.

The Ministry of Rural Development has signed an MoU with Flipkart to help empower local businesses and self-help groups (SHGs) especially those that are led by women by bringing them into the e-commerce fold.

The partnership is aligned with Deendayal Antyodaya Yojana – National Rural Livelihood Mission- DAY-NRLM’s goal of strengthening the capabilities of rural communities for self-employment and entrepreneurship.

The government is identifying and collaborating with all possible partners who can contribute to this cause and partnership between DAY NRLM and Flipkart will help in the process.

Giriraj Shri Singh, MoU will enable rural women to sell their products to more than 10 crore Flipkart’s customers. Minister of State for Rural Development Sadhvi Niranjan Jyoti was also present on the occasion.

The Indian Railway Catering and Tourism Corporation (IRCTC) has joined hands with Truecaller to provide passengers with greater trust in communication.

People now will be able to see a green verified business badge logo while making calls to the 139 Helpline.

Additionally, the verified SMS message header, Indian Railways brand name, and their profile photo on Truecaller will also ensure that the customers are communicating to IRCTC only — offering a safer customer experience and reducing the chances of frauds.

The Government of India has constituted a 20-member Empowered Group of Secretaries to monitor the development and implementation of the PM Gati Shakti National Master Plan (NMP).

The Cabinet Secretary will be the Chairperson of 20-member EGoS.

The destroyer was being built at Mazgaon Dock Limited (MDL).

The ships are designed by the service’s in-house design organisation ‘Directorate of Naval Design’.

The 163-metres-long warship has a full-load displacement of 7,400 tonnes and a maximum speed of 30 knots.

The overall indigenous content of the project is approximately 75%.

Apart from myriad indigenous equipment in the ‘Float’ and ‘Move’ categories, the destroyer is also installed with major indigenous weapons

The acquisition has been approved under Section 31(1) of the Competition Act, 2002

It will benefit the farmers of Haryana by providing quality seeds with transparency.

The portal will provide transparency in the seed production programme arranged by both the Government and private seed producing agencies and ensure the quality of certified seeds.

The seed portal has been linked with MeriFasalMeraByora Portal and Family Identity Card ID.

Through this portal farmers will get good high quality seeds, which can improve their manufacturing and revenue.

BhashaSangam is an initiative of the Ministry of Education under Ek Bharat Shreshtha Bharat, to teach basic sentences of everyday usage in 22 Indian languages.

To acquire basic conversational skills in an Indian language other than their mother tongue.

This is an initiative of DoHE, in collaboration with MyGov& the App has been developed by a start upMultibhashi,

The App initially has 100 sentences of every day usage in 22 Indian languages.

The portal was launched by ShriPradip Kumar Das, Chairman & Managing Director (CMD), IREDA as a part of ‘Vigilance Awareness Week 2021’.

The Whistle-blower Portal has been developed by the IT Team of the company.

Through this portal, IREDA employees can raise concerns related to fraud, corruption and abuse of power, among others.

According to the EdelGiveHurun India Philanthropy List 2021, Wipro Founder AzimHashimPremji has been listed as the most generous philanthropist.

HCL’s Shiv Nadar retained the second spot with an annual donation of Rs 1,263 crore in FY21.

Reliance Industries Limited Chairman MukeshAmbani occupied the third spot on the philanthropy list with an annual donation of Rs 577 crore.

A New Book Titled John Lang: Wanderer of Hindoostan, Slanderer in Hindoostanee, Lawyer for the Ranee authored by AmitRanjan.

The Book was Published by Niyogi books.

The book is about John Lang’s life, his exploits, and literary works

The Ministry of Sports has upgraded three existing sports facilities across the country as the Khelo India Sports Centres of Excellence (KISCE).

The total number of KISCEs now stands at 27, which is spread across 26 States and Union Territories.

The centres will also have High-performance Managers to ensure the quality of sports science input and performance management.

Former India cricketers Harbhajan Singh and JavagalSrinath are among 18 players who were given honorary life membership by the Marylebone Cricket Club.

Harbhajan is India’s third-highest wicket-taker in Tests, with 417 dismissals in 103 Tests,

Meanwhile JavagalSrinath is one of the country’s greatest ODI players, taking 315 wickets to end his career as India’s second-highest wicket-taker in ODIs,” 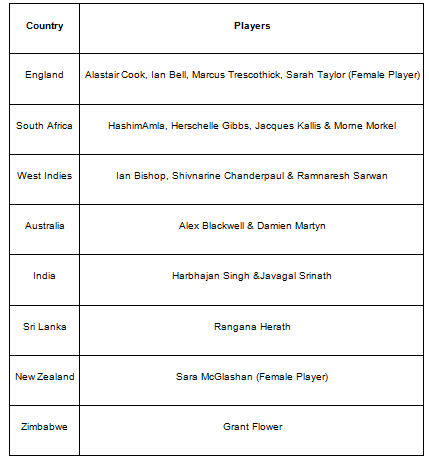 He served as acting prime minister of Afghanistan from 1995 to 1996.