2) The Union Government of India has launched the Eighth Edition of Swachh Survekshan – SS-2023.This survey is prioritizing which of the following R?

(e) All the above

3) Param Porul a supercomputer has been inaugurated in which of the following institution under the National Supercomputing Mission?

4) The Ministry of State for Electronics and Information Technology has organized brainstorming session on Mission Digital India called _______________.

5) Which of the following city has become the first major metropolitan city in India to make a detailed biodiversity register?

6) When would the Securities and Exchange Board of India’s new framework for managing Passive Funds, Exchange Traded Funds, and Index Funds comes into effect?

7) UCO Bank has signed a co-lending agreement with which of the following NBFCs for the agriculture business?

8) Mahagram has been partnered with a new-generation Indian bank IndusInd Bank to enhance the digital payments ecosystem. Mahagram headquartered in ___________.

9) Who among the following has become the first woman officer to join the Army Aviation Corps as a helicopter pilot at Nashik in Maharashtra?

11) Which among the following company has been conferred with the first prize for the year 2020-21?

13) How much % of the stake has been acquired by GIC in Aditya Birla Fashion and Retail Rs 2,195 crore?

14) According to the report titled Travel & Tourism Development Index (TTDI) 2021: Rebuilding for a Sustainable and Resilient Future’, which country is at the bottom?

15) Which of the following is true regarding the National Achievement Survey (NAS) 2021 report?

(a) The report conducts a comprehensive evaluation survey of children’s learning competencies in classes III (3), V(5), VIII(8), and X(10).

(b) It conducts a cycle period of 5 years

(c) The survey was managed through a technology platform designed and developed by the National Informatics Center.

16) Who has inaugurated the two-day National Women Legislators’ Conference-2022 at the Legislative Assembly complex?

17) Who among the following is the Chair of the committee formed to oversee the business of the All-India Football Federation and the approval of its constitution by the National Sports Code and model guidelines?

18) On __________th birth Anniversary of Ruskin Bond, the Penguin Random House India has released a new book titled “Listen to Your Heart: The London Adventure”

19) Which of the following symbol is printed on the coin that was minted in Hyderabad?

(a) To facilitate the distribution of banknotes and rupee coins.

(b) A currency chest is a depositary of RBI.

International Missing Children’s Day is an annual awareness event held on May 25th.

The day’s goals are to bring attention to the issue of child abduction, educate parents on how to protect their children, and honor those who have never been found as well as those who have.

This awareness event is co-sponsored by the Global Missing Children’s Network.

The network, founded in 1998, has 23 member countries that collaborate to share information and best practices to improve the effectiveness and success rate of missing children’s investigations.

Under Swachh Bharat Mission Urban 2.0, the Union Government of India has launched the Eighth Edition of Swachh Survekshan – SS-2023.

Shri Manoj Joshi, Secretary, of the Ministry of Housing and Urban Affairs, unveiled it at a virtual event in New Delhi.

Swachh Survekshan- 2023 is curated to achieve circularity in waste management, with the idea of ‘Waste to prioritize Wealth’ as its driving philosophy.

The survey would prioritize the three R’s: Reduce, Recycle, and Reuse.

As a result, in SS-2023, the evaluation will take four phases rather than the three in previous editions.

The NSM is a joint initiative of the Ministry of Electronics and Information Technology (MeitY) and the Department of Science and Technology (DST).

Startups are an important part of our digital ecosystem, and Mission Digital India Bhashini will assist them in developing India-specific and Indian Languages enabled IT solutions.

The document is prepared by the biodiversity management committee (BMC) of the civic body under the supervision of the state biodiversity board and with help from NGOs.

The Securities and Exchange Board of India (SEBI) has announced a new framework for managing Passive Funds, Exchange Traded Funds (ETFs), and Index Funds amid the growing popularity of such funds as investment products for retail investors.

The new framework will come into effect from July 1, 2022.

UCO Bank signed a co-lending agreement with NBFC Paisalo Digital Limited for agriculture business to capitalize on the huge Rs 8 lakh crore market of small-ticket loans for the 365 million underbanked and under-serviced population.

The tie-up will give a boost to the agriculture advance of the bank and it is a favorable situation for the bank as well as the NBFC with benefits reaching those at the bottom of the society.

A rural fintech company, Mahagram partners with a new-generation Indian bank IndusInd Bank, to enhance the digital payments ecosystem & provide a wider horizon to transact especially for its customers in rural India.

Captain Abhilasha Barak (26 years old) has become the first woman officer to join the Army Aviation Corps as a helicopter pilot after completing a year-long course at the Combat Army Aviation Training School at Nashik in Maharashtra.

Barak has been assigned to the second flight of the 2072 Army Aviation Squadron that operates the Dhruv advanced light helicopter (ALH).

It was described as a ‘Golden Letter Day’ for the Indian Army.

India’s Union Health Secretary Shri Rajesh Bhushan has been appointed as the Chairperson of Committee B at the 75th World Health Assembly (WHA) in Geneva, Switzerland.

The World Health Assembly functions through two types of committees: Committee A and Committee B

NHPC has also been awarded “Rajbhasha Kirti Puraskar” 9 times by the Government of India for its excellent work in the field of implementation of Rajbhasha.

On the occasion of Rabindranath Tagore’s birth anniversary, the chief minister of West Bengal, Mamata Banerjee, has received the first Bangla Academy award for her “relentless literary pursuit at the “Ravi Pranam” function organized by the government’s information and culture department.

The award was introduced by Sahitya Academy & it was presented to Banerjee for her book “Kabita Bitan”, which pays tribute to the best writers of West Bengal.

On behalf of Mamata Banerjee, the award was received by state Education Minister Bratya Basu.

Singapore’s sovereign wealth fund, GIC, is acquiring a 7.5% equity stake in Aditya Birla Fashion and Retail (ABFRL) for Rs 2,195 crore by way of preferential issue of equity and warrants.

GIC will invest Rs 770 crore now towards subscription of equity and warrants and follow it up by pumping in Rs 1,425 crore in one or more tranches within 18 months.

After the investment, Aditya Birla Group will hold a controlling stake of 51.9% in the company.

According to the report titled Travel & Tourism Development Index  (TTDI) 2021: Rebuilding for a Sustainable and Resilient Future’, released by the World Economic Forum (WEF), India has been ranked the 54th place in the overall rankings with a score of 4.2, down from 46th in 2019, but has remained on top within South Asia.

The theme of the WEF’s Travel & Tourism Development Index  (TTDI) 2021 is “Rebuilding for a Sustainable and Resilient Future”.

Bottom 5 Countries in the index : 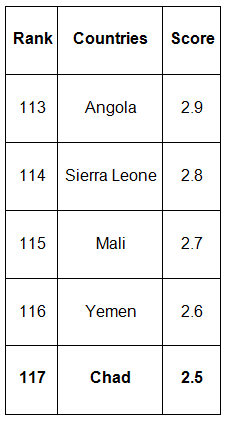 The report assesses the health of the school education system in the country by conducting a comprehensive evaluation survey of children’s learning competencies in classes III(3), V(5), VIII(8), and X(10) with a cycle period of 3 years.

It reflects the overall assessment of the school education system.

The survey was managed through a technology platform designed and developed by the National Informatics Center (NIC).

President Ram Nath Kovind will kick off the two-day National Women Legislators’ Conference-2022 in Thiruvananthapuram, Kerala at the Legislative Assembly complex, which is expected to bring a significant number of female parliamentarians and legislators from throughout the country.

The first-ever such event, organized by the state Assembly, is part of the nationwide celebrations marking India’s 75th anniversary of independence, known as the Azadi Ka Amrit Mahotsav.

The Supreme Court has established a three-member Committee of Administrators (CoA) chaired by former Supreme Court judge AR Dave to oversee the business of the All-India Football Federation (AIFF) and the approval of its constitution under the National Sports Code and model guidelines.