1) The Central Advisory Board on Archaeology has been reconstituted to strengthen relations in the Archaeological Survey of India. It is reconstituted for __________Years.

2) The Prime Minister Narendra Modi has launched India’s largest drone festival. Around how many exhibitors will display diverse drone use cases at the Drone Festival?

3) India would introduce a newly approved “made in India” TB infection skin test dubbed. What is its name?

4) As part of the Amrit Sarovar project the Prime Minister of India has asked infrastructure agencies to coordinate with _____________Projects.

(d) House for All

6) India Post Payments Bank has introduced issuer charges for the Aadhaar Enabled Payment System service (AePS).It will be effect from ________________.

7) MUFG Bank has become the first Japanese bank to open a branch at Gujarat International Financial Tech City in Ahmedabad. It is its __________Branch in India.

8) Which organisation would set up a regional office in India at the Gujarat International Finance Tec-City (GIFT City), Gujarat?

9) What is the name of the robo-advisory investment platform launched by HDFC Securities for all mutual fund investments?

12) Narinder Dhruv Batra has resigned as the president of the Indian Olympic Association. Who replaced him as an acting chief?

13) Anwar Hussain Shaik has been made the chair of the WTO’s Committee on Technical Barriers on Trade by replacing Elisa Maria Of which country?

14) Gaurav Sachdeva has been appointed as the CEO of which e-commerce venture?

15) Kishore Jayaraman ,the President of Rolls-Royce India has been received an honorary Officer of which country?

16) Name the novel that has notshortlisted inthe International Booker Prize.

(a) The Books of Jacob

(b) A New Name: Septology VI-VII

(b) Indian Navy and Mongolia Navy

18) The Army Training Command has signed a MoU with Rashtriya Raksha University to develop a ‘Wargame Research and Development Centre’ in _________________.

19) Which among the following country has won the Asia Cup 2022 hockey tournament?

20) How many medals have been won by India in the 12th edition of the 2022 International Boxing Association (IBA) Women’s World Boxing Championship?

The Central Advisory Board on Archaeology (CABA), which was constituted seven years ago to strengthen relations between the Archaeological Survey of India (ASI) and those involved in archaeological research, has been re-established.

The ASI recreated the board, with the culture minister serving as chairwoman and members.It was reconstituted for a three-year term to promote closer contact between the Archaeological Survey of India and Indian universities conducting archaeological research, as well as other institutions conducting studies related to the application of archaeological principles, and to provide for a closer association of learned societies in India with the ASI’s activities.

The prime minister will meet with Kisan drone pilots, observe open-air drone demos, and meet with startups at the drone exhibition centre.

Around 70 exhibitors will display diverse drone use cases at the Drone Festival.

The Bharat Drone Mahotsav 2022 will include a virtual awarding of drone pilot certifications, panel talks, product launches, a display of a ‘Made in India’ Drone Taxi prototype, and flying demonstrations, among other things.

This low-cost tool will be extremely beneficial to other high-burden countries as well.

This year, a new effort called “Adopt people with TB” will be launched, which will call on corporates, industries, organisations, political parties, and individuals to come forward and adopt TB-infected people and families, providing nutritional and social support.

Shri Narendra Modi, Prime Minister of India, has asked infrastructure agencies to coordinate their initiatives with the water bodies being built as part of the AmritSarovar project.

Mr Modi added that this would be a win-win situation because the material required for the AmritSarovar could be utilised for public works by the agencies.

The Prime Minister presided over the 40th edition of PRAGATI, a multi-modal ICT-based platform for Pro-Active Governance and Timely Implementation that brings together the Centre and State governments.

The 4th Edition of State-Level Shirui Lily Festival 2022 began at Shirui Village Ground in Ukhrul district, Manipur from May 25 to May 28, 2022.

It is the four-day long festival inaugurated by the Governor of Manipur La. Ganesan and the Chief Minister N. Biren Singh.

It is founded in Ukhrul district of Manipur only and cannot be replanted anywhere in the world.State Flower of Manipur – Shirui Lily

AePS Issuer transaction charges will be in effect from June 15, 2022.

AePS allows you to do six types of transactions.

The first three AePS issuer transactions each month, such as cash withdrawal, cash deposit, and mini statement, will be free of charge.

This will be its 6th branch in India.

HDFC Securities has launched HDFC Money, a robo-advisory investment platform for all mutual fund investments. HDFC Money is a 100 percent digital platform that doesn’t involve opening or having a Demat Account.The E-Will facility, which starts at ₹1,500, voluntary assistance in the creation of a will on the distribution of wealth and other assets.

It cites the rise in crude oil, food and fertilizer prices that will weigh on household finances and spending even as interest rate hikes to curb inflation will slow the demand recovery’s momentum.

While in the US and UK, GDP growth is expected to be around 2.8 percent each.

Mr NarinderDhruvBatra resigned as the president of the Indian Olympic Association (IOA).

Mr Batra will continue to serve as the chief of the FIH.

The Indian Olympic Elections that were due to be held in December 2021 were suspended temporarily due to the pending court case.

An Indian government officer Mr Anwar HussainShaik has been made the chair of the World Trade Organization’s (WTO) Committee on Technical Barriers on Trade.

Mr.Shaik will take this role from Elisa Maria Olmeda de Alejandro from Mexico.

JSW Group, has appointed Mr GauravSachdeva as the CEO of JSW One Platforms, an e-commerce venture of the group.

In his new role, Mr Sachdeva will be responsible for creating a robust transparent platform that will ease buying and selling of steel and other products for manufacturing and construction MSMEs in the country.

Also he worked with institutions like Citibank, Bank of America and Infosys.

President of India and South Asia for Rolls-Royce, Kishore Jayaraman, has received an honorary Officer of the Order of the British Empire (OBE) by Her Majesty The Queen.

He received the award for services to international trade and investment, with a key focus on promotion of India-UK trade.

Shree’s novel was chosen from a shortlist of six books, the others being:

RRU will collaborate with Tech Mahindra to develop the center over the next 3 to 4 months.

India joined Japan, Malaysia, and South Korea in the Asia Cup Super-4 round.

To qualify, India needed to win by at least a 15-0 score, and the young team thrived under duress.

310 boxers from 73 countries competed in the event.

Belarusian and Russian boxers were barred from competing in the tournament following a ban imposed as a result of Russia’s invasion of Ukraine. 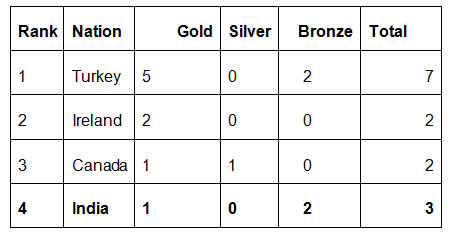