1) Which among the following day has been observed on July 7across the world?

2) The KVIC has initiated the project named “Bamboo Oasis on Lands in Drought”, the first of its kind exercise in India at a village of which among the following State?

3) The Jammu and Kashmir has approved the uploading of Geotagged photographs through ‘PROOF’ mobile application. What is R mean in PROOF?

4) The Odisha Government has approved five major industrial projects to raise the production capacity of which among the following product?

5) The National Tiger Conservation Authority has approved the conversion of which among the following Sanctuary into the fourth tiger reserve in the state?

6) Which among the following online payment solutions provider, has partnered with WooCommerce, to enable merchants with digital payments infrastructure, and end-to-end digitalization of business processes?

7) Which among the following online payment solutions has recently launched the“Postpaid Mini” for consumption-based credit for users to help them manage their household finances?

8) The President Ram NathKovind has appointed eight new governors recently. Who among the following has been appointed as the governor of Karnataka?

9) Dr.MadhuriKanitkarhas been appointed as the new Vice-Chancellor of the Maharashtra University of Health Sciences. The MUHS is __________ based University.

10) Which among the following minister has declared as the “brand ambassador” of KhadiPrakritk Paint?

12) Which among the following Country’s Airline has bagged the “Airline of the year” award by aviation publication Air Transport World?

13) SirishaBandla has become the second Indian-origin woman to head into space as part of Virgin SpaceShip Unity. She hails from which among the following state?

14) The Minister of Ayush ,ShriKiranRijiju has launched five portals of importance and four publications Virtually. Which among the following portal has not released?

15) Who among the following would be the Men flag bearer at the opening ceremony of the Tokyo Olympics?

16) HouYifanhas won the FIDE Chess.com by defeating GM HarikaDronavalli.HouYifan hails from which among the following country?

17) The Goldmoney Asian Rapid tournament has been won by LevonAronian by defeating VladislavArtemiev. This is a _________ tournament.

(a) Romantic king of Bollywood

19) Richard Donner has passed away recently. He was associated with which among the following field?

World Chocolate Day, sometimes referred to as International Chocolate Days, is an annual celebration of chocolate, occurring globally on July 7.

The observance of World Chocolate Day dates back to 2009 and some suggest July 7 in particular celebrates the introduction of chocolate to Europe in 1550.

The day is observed to celebrate chocolate, and lovers of chocolate around the world enjoy different kinds of chocolates on this day.

A unique scientific exercise serving the combined national objectives of reducing desertification and providing livelihood and multi-disciplinary rural industry support has been initiated by Khadi and Village Industries Commission (KVIC).

The project named “Bamboo Oasis on Lands in Drought” (BOLD) is the first of its kind exercise in India which was launched from the tribal village NichlaMandwa in Udaipur, Rajasthan.

KVIC has thus created a world record of planting the highest number of bamboo saplings on a single day at one location.

In Jammu and Kashmir, the Union Territory Administration accorded sanction to uploading of Geotagged photographs through ‘PROOF’ (Photographic Record of On-site Facility) mobile application while preferring bills in the concerned Treasuries against the budget allotted through BEAMS application.

The necessary training and hand-holding will be immediately provided to all the DDOs enabling them to upload photographs through this application from 15th of this month.The ‘PROOF’ application will be available for downloading on the BEAMS Portal

The Odisha Government has approved five major industrial projects giving a big push to the steel production capacity of the state.

These projects worth over 1.4 lakh crore rupees were approved by the State High-Level Clearance Authority chaired by Chief Minister Naveen Patnaik.

National Tiger Conservation Authority, NTCA, has approved the conversion of the RamgarhVishdhari Sanctuary in Rajasthan’s Bundi district into the fourth tiger reserve in the state.

The proposal for converting the RamgarhVishdhary Sanctuary, which is spread across 1,071 square kilometres, into a tiger reserve was recently approved by the National Tiger Conservation Authority’s technical committee.

The NTCA is now expected to send a committee to review the Bundi sanctuary. Tigers from Ranthambore can only be translocated to the new sanctuary after the NTCA’s approval.Upgrading the sanctuary would resolve the space crunch at Ranthambore reserve.

The partnership will offer merchants exclusive pricing on transactions, no hidden charges, and contactless payment solutions to scale growth and profitability.

Paytm announced the launch of Postpaid Mini, a need-based and consumption-based credit for users to help them manage their household finances.

This product is an extension of its Buy Now, Pay Later service targeted at users who don’t have a credit score.

Bhavesh Gupta, CEO, Paytm Lending  stated, “The idea behind launching this product is to give an opportunity to a wider section of people to experience credit with smaller ticket size loans and learn fiscal discipline”.

President Ram NathKovind appointed eight new governors giving them charge of administration of new states. While many were transferred, others were new appointments. 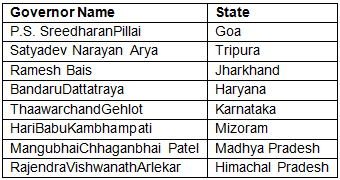 Lt. Gen. Dr.MadhuriKanitkar, Deputy Chief, Integrated Defence Staff (Medical) in the Ministry of Defence, has been named the new Vice-Chancellor of the Maharashtra University of Health Sciences (MUHS), Nashik.

The announcement by Maharashtra Governor Bhagat Singh Koshyari, who is also the Chancellor of the state’s universities, said Lt. Gen. Kanitkar’s appointment will be for five years, or till she attains the age of 65 years, whichever is earlier.

Road Transport and Highways and MSME NitinGadkari declared that he is “brand ambassador” of KhadiPrakritk Paint and noted that he would promote it across the country so as to encourage young entrepreneurs to take up the manufacturing of cow dung paint.

Virtually inaugurating the new automated manufacturing unit of KhadiPrakritik Paint, India’s first and only paint made from cow dung, in Jaipur, the minister appreciated the technology innovation and said this would go a long way in empowering the rural and agro-based economy in the country.

Gadkari stated inaugurating infrastructure projects worth lakhs of crores of rupees is not as pleasing and satisfying as inaugurating this manufacturing unit.He lauded Khadi and Village Industries Commission for the successful research.

Neha Parikh, the former Indian-American president of the travel website Hotwire, has been appointed as the new CEO of Waze, a crowd-sourced navigation app and a subsidiary of tech giant Google.

Neha, a board member of the online used car retailer Carvana, replaced Noam Bardin, who stepped down in November as the CEO after leading the Israeli company for 12 years.

The Seoul-based airline was chosen by an independent board of ATW and Aviation Week Networks editors and analysts for its leadership and ability to stay profitable throughout last year despite the industry’s unprecedented crisis during the pandemic.

This award is a tribute to our employees for their dedication, sacrifices and loyalty, especially during the tumultuous past year”.

SirishaBandla was the second Indian-origin woman to head to space as part of Virgin SpaceShip Unity on July 11.

Andhra Pradesh-born Bandla will be one of the six space travellers aboard ‘VSS Unity’ of Virgin Galactic, scheduled to take off from New Mexico alongside the company’s founder Richard Branson.

The Telugu woman from Andhra’s Guntur district who was brought up in Houston will become the second India-born woman to fly into space after KalpanaChawla.

Rakesh Sharma and Sunita Williams were the other Indians who went into space prior to Bandla.

Creation of Ayurveda Data Set in CTRI facilitates the usage of Ayurveda Terminologies to record clinical study based on Ayurveda interventions.

CCRAS-Research Management Information System- A collaborative effort of ICMR and CCRAS, this portal will be a one stop solution for Research and Development in Ayurveda based studies.

AMAR (Ayush Manuscripts Advanced Repository) Portal- This Portal is of immense value and it has digitized information on rare and hard to find Manuscripts and catalogues of Ayurveda, Yoga, Unani, Siddha, SowaRigpa in libraries or in individual collections across India or in other parts of the world.

BajrangPunia, a silver medallist at the 2018 World Wrestling Championships, will be the flag-bearer at the closing ceremony on August 8.

This is for the first time that India will have two flag-bearers, one male and one female, at Olympics Games, to ensure “gender parity”.

Hou clinched the $20,000 first prize in a tight match where she won the final two bullet games.

The Armenian grandmaster defeated the Russian chess player VladislavArtemiev. He will receive a $ 30,000 prize for winning first place.

He was popularly known as the tragedy king of Bollywood. He was last seen in the 1998 film Qila. Dilip Kumar made his Hindi film debut in 1944 with the movie ‘JwarBhata’. In a career spanning over six decades.

The legendary actor played prominent roles in several classic Hindi language films in the 1950s and 1960s. Some of these films include Mughal-E-Azam, Devdas, NayaDaur, Ganga Jumna, Ram aurShyam, and others.

On July 05, 2021, Hollywood director and producer, Richard Donner, Passed away.

In 1976, The Omen became his first major hit. Donner is best known for the Lethal Weapon series, and the original Superman film featuring Christopher Reeve.