1) Which of the following minister has launched ‘Samajik Adhikarita Shivir’ for distribution of aids and assistive devices to ‘Divyangjan’ under the ADIP Scheme?

2) What is the length of the Six Lane Ganga Expressway,built at a cost of over Rs 36,200 crore in Shahjahanpur, Uttar Pradesh?

3) Which among the following state government has organised the National Conclave on Natural Farming?

5) Which of the following bill is /are scheduled to be introduced in the LokSabha?

(e) All the above

6) The Vice President Venkaiah Naidu has inaugurated the National Parliamentary Conference on ____________among Women.

7) Which of the following ministry haslaunched the Management Information System portal for rankings of States and Union Territories in Land Acquisition Projects?

(a)Ministry of Information and Broadcasting

(b)Ministry of Science and Technology

8) The Ministry of External Affairs would organise the second lecture on which among the following person?

10) How many indigenous satellites would be launched by the ISRO into the Earth’s orbit along with foreign satellites during 2021-2023?

11) A Bilateral meeting between India along with which country hasscheduledto strengthen Telecommunications and Postal Sector?

12) In which of the following city the Union MinisterJitendra Singh has inaugurated the seventh edition of India International Science Festival?

13) What is the theme of the All-India Mayors’ Conference, chaired by Prime Minister Narendra Modi in Varanasi?

14) Name the stategovernment that has started the Khel Nursery Scheme to promote sports in the state.

15) Which organisation has approved $150 million for ‘Chennai City Partnership: Sustainable Urban Services Programme’ to improve the quality and financial sustainability in Chennail?

16) Which country is not among the top five countries from where FDI Equity Inflows receivedby India during 2014 to 2021?

18) Name the Digital payments platform that has announced tokenised cards on all three major payment networks – Visa, Mastercard and Rupay.

19) Who has been appointed as the new country manager of Mandiantfor Indiaand SAARC Markets?

20) Arvind Kumar has been appointed as the director-general of the Software Technology Parks of India. Previously he worked in ______________.

21) Who has been appointed as the Chairman of Chiefs of Staff Committee after the death of the Chief of Defense Staff Gen BipinRawat in the IAF helicopter crash?

22) How many crore has been invested by Tata Steel and AngulSukinda Railwayto meet the logistic needs of its Kalinganagar Steel plant?

23) Which among the following organisation has hosted the 8th Edition of the Indian Ocean Dialogue virtually?

24) Under the Atmanirbhar Bharat Rojgar Yojana, which state has ranked second with 5, 35,615 new employees?

25) Who among the following has released the book, ‘Gandhitopi Governor’at Upa Rashtrapati Nivas, New Delhi?

26) A Book titled,“Rewinding of First 25 years of Ministry of Electronics and Information Technology” has been authored by whom?

27) The Sports Minister Anurag Singh Thakur has inaugurated the first edition of Khelo India U21 Women’s Hockey League in which state/UT?

28) How many Athletes have been identified by the central government under the Target Olympic Podium Scheme (TOPS) at a meeting of the Mission Olympic Cell?

Union Minister for Social Justice and Empowerment, Dr.Virendra Kumar has virtually inaugurated ‘Samajik Adhikarita Shivir’for distribution of aids and assistive devices to ‘Divyangjan’ under the ADIP Scheme and to Senior Citizens under the ‘RashtriyaVayoshriYojana’ of the Ministry of Social Justice and Empowerment, Government of India in District Bhadohi.

The Camp was organized by the Department of Empowerment of Persons with Disabilities (DEPwD) in association with Artificial Limbs Manufacturing Corporation of India (ALIMCO), a Miniratna-II PSU under Ministry of Social Justice and Empowerment, Government of India and District Administration, Bhadohi (U.P) at Vibhuti Narayan, Government Inter Collage, Gyanpur in Bhadohi District, Uttar Pradesh.

The inspiration behind the Expressway is the vision of the Prime Minister to provide fast paced connectivity across the country.

Union Ministers ShriAmit Shah, Shri Narendra Singh Tomar, Governor of Gujarat, Chief Ministers of Gujarat, and Uttar Pradesh were among those present on the occasion.

Addressing the farmers, the Prime Minister called for the adaptation of agriculture according to new requirements, new challenges of the journey till the 100th year of independence.

The Prime Minister noted that in the last 6-7 years, several steps have been taken, from seed to market to increase the income of the farmers.

The Government of Gujarat organized the National Conclave on Natural Farming. The three-day Summit was organized from 14th to 16th December 2021.

With an aim to strengthen the cyber security ecosystem in Government organizations in the country, the National e-Governance Division under the Ministry of Electronics, and Information Technology (MeitY) is conducting a six-day deep dive training program for 25th Chief Information Security Officers (CISOs) and frontline IT officials from various Ministries & Departments, Government & Semi-Government organisations from Central and State Governments, PSUs, banks, among others.

The training program is a part of a series of workshops organised by the National e-Governance Division at MeitY under the Cyber Surakshit Bharat initiative.

The National Anti-Doping Bill, 2021, The Wild Life (Protection) Amendment Bill, 2021 and The Chartered Accountants, the Cost and Works Accountants and the Company Secretaries (Amendment) Bill, 2021 are scheduled to be introduced in the LokSabha.

There will be further discussion and voting on the Supplementary Demands for Grants Second Batch for 2021-22 in the LokSabha.

In the RajyaSabha, The Mediation Bill, 2021 is scheduled to be introduced.

India is committed to end TB by 2025, five years ahead of the global Sustainable Development Goals target of 2030.

As per the ranking and performance, the top three States and top three districts will be awarded.

The MIS portal will not only show the data and figures, but it will also show the speed of the development in the country.

This portal is a result of the vision of Prime Minister Narendra Modi to give impetus to the government’s Gati Shakti Mission.

The Ministry of External Affairs will be organizing the second AtalBihari Vajpayee Lecture on 24 December 2021.

The lecture will be delivered by Dr Michael Fullilove, Executive Director of the Lowy Institute of Australia.

It will be on “Australia, India and the Indo-Pacific: The need for strategic imagination”.

This is the second edition of this lecture series, which was instituted in memory of former Prime Minister and External Affairs Minister Late ShriAtalBihari Vajpayee.

India’s Ashok Leyland and the combat vehicles research and development establishment (CVRDE) have partnered to develop and manufacture the 600hp indigenous engine for combat vehicles.

It also marks a key milestone in India’s successful week under AzadiKaAmrutMahotsav.

The event was held at Ashok Leyland’s engine development center in Chennai, India.

Dr.Jitendra Singh informed that about 132 million Euros would be earned through launching of these foreign satellites on a commercial basis.

The theme of 4-day IISF 2021 is ‘Azadi Ka Amrit Mahotsav’ – “Celebrating Creativity, Science, Technology and Innovation for a prosperous India”.

Mayors from various states across the country participated in the conference, being organised by the Department of Urban Development, Uttar Pradesh.

The theme of the Conference is “New Urban India”. It has been the constant endeavour of the Prime Minister to ensure ease of living in urban areas.

The Haryana government has started the Khel Nursery Scheme to promote sports in the state. This was stated by Minister of State for Sports and Youth Affairs Sandeep Singh.

Under the scheme, sports nurseries will be started in government, private educational institutions, and private sports institutions.

For this, applications have been invited by the department till January 20, 2022.

With this scheme, sports talent will get an opportunity to emerge at the grassroots level.

Under the scheme, sports nurseries are being opened for the sports included in the Olympic, Asian and Commonwealth Games.

AIIB’s mission is to finance ‘Infrastructure for Tomorrow’ (i4t)-green infrastructure with sustainability, innovation, and connectivity at its core.

India has registered the highest ever annual Foreign Direct Investment (FDI) inflow of 81.97 billion dollar in 2020-21.

The Ministry, top five countries from where FDI Equity Inflows were received during 2014 to 2021 are Singapore, Mauritius, USA, Netherlands and Japan.

Under this partnership, HomeFirst will originate loans as per the agreed credit policy of UBI in line with the provisions of RBI’s Co-Lending Model.

HomeFirst will retain minimum 20 per cent of the loan on its book while 80 per cent will be on UBI’s book.

Digital payments platform PhonePe has announced that it has tokenised cards on all three major payment networks – Visa, Mastercard and Rupay.

The Reserve Bank of India has asked payment aggregators and the merchantsonboarded by them to not store actual credit card data.

Starting January 1, 2022, no entity in the card transaction or payment chain, other than the card issuers and/or card networks, shall store the actual card data. Instead, cardholders can get digital tokens to complete their online transactions.

PhonePe is offering its tokenisation solution “PhonePeSafecard” to enable businesses to offer tokenisation on their own platforms via an API integration.

Rao will be responsible for revenue generation, strategic business development, and operations.

An industry veteran with over 25 years’ experience Balaji will be spearheading the team to help organizations in India gain their cyber security advantage.

ArvindKumar, has been appointed as the director-general of the Software Technology Parks of India (STPI).

Before joining STPI, Arvind Kumar was working in the Telecom Regulatory Authority of India (TRAI) in 2004.

As an advisor in TRAI, he was responsible for broadband, data security and privacy issues, manufacturing, DTH, IPTV, TV broadcasting and OTT, after having worked since 1997 in the Indian Government-run premier technology center, C-DoT.

The government has appointed General MM Naravane, Chief of Army Staff, as the Chairman of Chiefs of Staff Committee (Chairman, CoSC).

The post fell vacant following the death of the Chief of Defense Staff Gen BipinRawat in the IAF helicopter crash on December 8.

Tata Steel has entered into a long-term agreement with AngulSukinda Railway (ASRL) to invest ₹400 crore for construction, operation, and maintenance of additional rail line to meet the logistic needs of its Kalinganagar Steel plant.

AngulSukinda Railway is a public limited company incorporated as a special purpose vehicle by the Ministry of Railways for developing, financing, construction, operation and maintenance of a 104.24-km-long broad gauge single railway line between Angul and Sukinda in Odisha.

Tata Steel will fund the ₹400-crore expenditure in a phased manner by subscribing to 40 crore non-convertible, non-cumulative, redeemable preference shares of ASRL.

Maharashtra has topped the list of states with the maximum number of beneficiaries under the Atmanirbhar Bharat RojgarYojana (ABRY), with 6,49,560 new employes in 17,524 (Estts), Beneficial amount of 4,09,72,34,366. 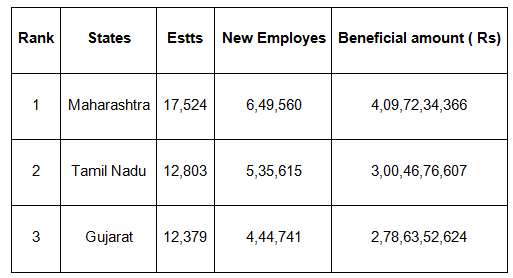 The Book is Published by Emesco Books.

Former Governor of Tamil Nadu, Shri P.S. RammohanRao, author of the book, ShriYarlagadda Lakshmi Prasad, CEO of Emesco Books, Shri Vijay Kumar and others were present during the event.

The Book narrates the first 25 years of MeitY.

The hockey tournament is slated to be held from December 15 to 21 & it is Organized by the Sports Authority of India in collaboration with Hockey India.

The central government has identified a total of 148 athletes, including 20 new inductees, in seven Olympic disciplines and six Paralympic disciplines for support under the Target Olympic Podium Scheme(TOPS) at a meeting of the Mission Olympic Cell of the Ministry of Youth Affairs and Sports.