1) In which of the following city the first International Day of Diplomats was celebrated?

(a) Stories of Progress: Past and Present

(b) A win against Polio

(c) Delivering on a Promise

4) On which of the following date the United Nations World Development Information Day has been observed?

6) Kangana Ranaut has won the67th National Film Awards under Best Actress category for which of the following film?

(c) Manikarnika: The Queen of Jhansi

7) A Scheme titled ‘Shri Dhanwantri Generic Medical Store’ has been launched by which of the following state?

8) The Seed Production Technology of Gaint Freshwater Prawn/scampi has been launched by which of the following ministry in Bihar?

(a) Ministry of State for Fisheries and Animal Husbandry

(b) Ministry of State for Jal Shakti

(c) Ministry of State for Agriculture

(d) Ministry of State for Finance

9) How much crore worth refunds has been issued by the Central Board of Direct Taxes to over 63.23 lakh taxpayers?

10) How many tranches of Sovereign Gold Bonds has been issued by the Centre in consultation with RBI?

11) Who among the following has been assumed charge as the Chairperson of the Chennai Port Trust?

12) How many films has been shortlisted for this year’s India’s official entry to the Oscars 2022?

13) The National Inter-Religious Conference, organized by Lokmat Media Group has been held in which city?

14) Which of the following has been successfully tested from the Integrated Test Range Chandipur off the coast of Bay of Bengal in Odisha?

16) Which of the following Application has been launched by the Election Commission of India for the digital mapping of all polling stations?

17) Which of the following country has successfully launched a new satellite from the Xichang Satellite Launch Center?

18) Which of the following Species of fish has been recently discovered by the Department of Zoology of Dera Natung Government College of Itanagar in Arunachal Pradesh?

(e) All the Above

19) Which of the following book of Ruskin Bond has been released recently?

(c) Writing for My Life

20) Who has clinched the 2021 Denmark Open in the Men’s single Category?

21) Max Verstappen of Red Bull has won the 2021 United States Grand Prix. He belongs to which country?

Every Year, The International Day of Diplomats is celebrated on 24 October.

The day aims to commemorate the contributions made by diplomats in shaping the world since ancient times and in making our planet a better place.

It also aims to bridge the gap in perception and reality of diplomats’ lives among the general public.

The first International Day of Diplomats was celebrated in Brasília on 24 October 2017.

The day was proposed by Indian poet-diplomat Abhay K and saw participation from the diplomats of Bangladesh, France, Ghana, Israel, Italy, Mexico, South Africa and Turkey.

United Nations Day on October 24th, celebrated every year since 1948, marks the anniversary of the day when the UN Charter entered into force.

The UN, as the world’s only truly universal global organization, was founded on October 24th 1945. It is currently made up of 193 States Members and it is the place where all Nations discuss common problems and find solutions that benefit humanity: peace, justice, respect, human rights, tolerance, solidarity.

Usually a concert is held to mark the UN Day at Headquarters in New York.

It was declared to be an international observance in 1971 by UNGA and that it should be observed as a public holiday by United Nations member states.

The year 2021 marks the 76th anniversary of the United Nations and its founding Charter.

World Polio Day is observed on October 24 every year to raise awareness for polio vaccination and eradication of polio.

The World Polio Day was established by Rotary International over a decade ago to commemorate the birth of Jonas Salk who led the first team to develop a vaccine against poliomyelitis.

The 2021 theme for World Polio Day is “Delivering on a Promise.”

As per WHO use of the poliovirus vaccine and subsequent widespread use of the oral poliovirus, developed by Albert Sabin, led to the establishment of the Global Polio Eradication Initiative (GPEI) in 1988.

The United Nations World Development Information Day is held on October 24 every year.

The General Assembly in 1972 established World Development Information Day aims to draw the attention of the world to development problems and the need to strengthen international cooperation to solve them.

Modi will participate in the 16th G-20 Summit in Rome from 30th and 31st October at the invitation of the Prime Minister of Italy Mario Draghi.

The Summit will also be attended by Heads of State and Heads of Government of G-20 Member Countries, the European Union and other invited countries and International Organizations.

This will be the 8th G-20 Summit that Prime Minister would be attending. The G-20 has emerged as the premier global forum for international economic cooperation. India is scheduled to host the G-20 Summit in 2023 for the first time.

The forthcoming Summit under the Italian Presidency is centred around the theme ‘People, Planet, Prosperity’, focussing on the areas of Recovery from the Pandemic and Strengthening of Global Health Governance, Economic Recovery and Resilience, Climate Change and Energy Transition and Sustainable Development and Food Security.

The 67th National Film Awards ceremony, given by the Directorate of Film Festivals which comes under the Ministry of Information and Broadcasting, was originally slated to be held on 3 May 2020 but was postponed due to the COVID-19 pandemic.

A total of 461 feature films, 220 non-feature films, 25 books on cinema, 12 film critics, and 13 film-friendly states competed for the awards. The awards were announced in March 2021 for the films released in 2019.

To provide medicines at low and affordable rates to consumers.

Union Minister of State for Information and  Broadcasting and Fisheries and Animal Husbandry, L Murugan has inaugurated the Seed Production Technology of Gaint Freshwater Prawn/scampi in Bihar virtually from Hyderabad.

The National Fisheries Development Board (NFDB) has provided financial assistance of 77.16 lakh rupees for the project. The Recirculate Freshwater Prawn Hatchery will have a production capacity of 5 million PL per annum.

Meanwhile, the direct taxes watchdog had issued refunds worth over Rs 74,158 crore to more than 45.25 lakh taxpayers from April 1 to September 20.

Centre in consultation with RBI has decided to issue four tranches of Sovereign Gold Bonds from October 2021 to March 2022. Subscription for the next tranche can be done between 25th to 29th October.

The Bonds will be sold through Scheduled Commercial banks, designated post offices, and Stock exchanges. Bonds will be restricted for sale to resident individuals, HUFs, Trusts, Universities and Charitable Institutions.

It will be denominated in multiples of gram of gold with a basic unit of 1 gram and Minimum permissible investment will be 1 gram of gold.

Price of Bond will be fixed on the basis of simple average of closing price of gold of 999 purity, published by the India Bullion and Jewellers Association Limited for the last 3 working days of the week preceding the subscription period.

Discount of ₹50 per gram will be given for those who will subscribe it online and pay through digital mode.

Sunil Paliwal has assumed charge as Chairperson of the Chennai Port Trust (ChPT).

Paliwal succeeds P Raveendran, who has reverted to his parent organisation – the Indian Railways.

Shaji N Karun, the chairperson of the 15-member selection committee, announced the decision while Film Federation of India (FFI) Secretary-General Supran Sen confirmed that the decision was a unanimous one.

In February 2021, Koozhangal was screened at the 50th International Film Festival of Rotterdam in Netherlands. The film was also awarded the prestigious Tiger Award at the film festival.

14 films were shortlisted for this year’s India’s official entry to the Oscars 2022. Assamese film ‘Bridge’ was among the 14 films.

To celebrate the golden jubilee year of its Nagpur edition, National Inter-Religious Conference organized by Lokmat Media Group in Nagpur.

Theme of the conference was Global Challenges to Communal Harmony and Role of India’.

It is a forum for bringing together the views of different religions and sects.

On Oct 22, 2021, The Defence Research and Development Organisation (DRDO) successfully tested the High-speed Expendable Aerial Target (HEAT)- ABHYAS, from the Integrated Test Range (ITR), Chandipur off the coast of Bay of Bengal in Odisha.

It is scheduled for induction into the Indian Navy by August 2022.

The warship has been built by Cochin Shipyard Limited(CSL).

The Indian Navy significantly has been focusing on bolstering its overall capabilities in view of China’s growing efforts to increase its military presence in the Indian Ocean Region.

The Election Commission of India (ECI) launched the Garuda app for the digital mapping of all polling stations.

The Garuda app will contain data such as latitude and longitude of the polling stations and will ensure faster, smarter, transparent, and timely completion of election work.

Through this app, Booth Level Officers (BLO) will upload photos and location information of the polling stations, along with data like latitude and longitude of the centre, from their registered mobile numbers.

It will also help in reducing the paperwork.

The BLO’s will also be given the ability to add or delete voter names or modification of addresses in the electoral roll.

The App can track several facilities that have been finalised as assured facilities at the booths like toilets, wheelchair, drinking water, electricity, sheds, chairs, ramps for differently-abled.

The number of polling booths has increased from 23211 to 24659 booths as a result of the Covid-19 pandemic.

The satellite was developed by the Shanghai Academy of Spaceflight Technology & it was launched by a Long March-3B carrier rocket.

This launch marked the 393rd mission for the Long March series carrier rockets.

The Department of Zoology of Dera Natung Government College of Itanagar in Arunachal Pradesh has discovered three new species of fish of genus Aborichthys of family Nemachelidae.

The discovery has been published in international journals like Asian Journal of Conservation Biology, Journal of Threatened Taxa and FishTaxa.

The three fish species are distributed in streams like Senki, Barap and Palin, which are the tributaries of Brahmaputra river system.

The Book is published by Penguin Random House India (PRHI).

The Book brings together some of the most exemplary stories, essays, poems and memories by celebrated award-winning author Ruskin Bond.

It comes 25 years after the publication of his another anthology, “The Best of Ruskin Bond”. 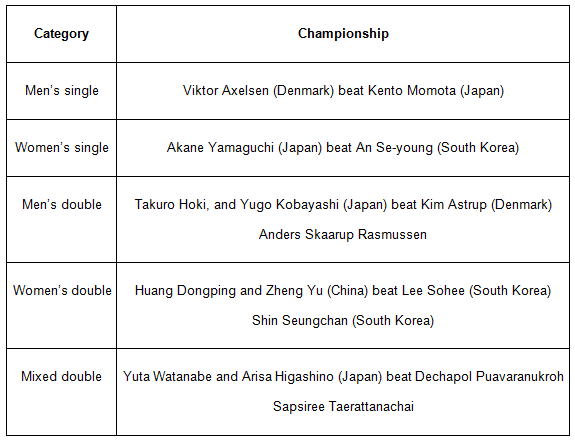 This is the 8th win for Verstappen in this season.

In the 2021 FIFA Rankings India has additionally moved one spot forward to the 106th position after the Sunil Chhetri-led aspect received the SAFF Championship.

The Blue Tigers had defeated Nepal in the summit clash.