1) What is the theme of World Children’s Day 2021, celebrated annually on 20 November?

(a) Children are taking over and turning the world blue

(b)Children of today our keepers tomorrow

(d) A better future for every child

Which of the following Statements is/are true about Pradhan Mantri Gram Sadak Yojana?

Statement 1: The Cabinet has approved the continuation of the PMGSY-I and PMGSY-II up to December 2022.

3) Who among the following would be honoured with Satyajit Ray Lifetime Achievement Award in the 52nd edition of the International Film Festival of India?

4) What is the total cost for the procurement of two Fixed Base Full Mission Simulators (FBFMS)  for Jaguar Aircraft from HAL for Indian Air Force?

5) Which among the following countries are the partner countries in the first edition of the “Infinity Forum”?

6) India has virtually participated in which of the following edition of Annual Council of Ministers meeting?

7) Name the state that has launched India’s first of its kind WhatsApp chat bot dedicated to facilitate the citizens to apply for a ration card, lodge grievances and get access to other critical resources.

8) Which Bank has launched a micro-credit facility for the street vendors under PM Street vendor’s Atma Nirbhar Nidhi?

9) Mswipe has announced a partnership agreement with One Card, a mobile-first credit card company. Where is the Headquarters of One Card located?

10) According to which Article of the Constitution, M Duraiswamy has been appointed as the Acting Chief Justice of the Madras HCby the President in consultation with the Chief Justice of India?

11) Name the Sports Person who has been declared as the brand ambassador of the TRIFED Aadi Mahotsav.

12) Which of the following minister has attended the Abu Dhabi International Petroleum Exhibition and Conference?

13) The Defence Minister Rajnath Singh has dedicated the renovated Rezang La Memorial. The memorial is located in ________________.

14) Name the security exercise conducted by the Indian Navy in the Offshore Development Area off the coast of Mumbai.

15) A book titled, “Sunrise Over Ayodhya: Nationhood in Our Times” has been authored by whom among the following?

16) AB De Villiers has announced his retirement from all forms of cricket. He hails from which country?

17) Alexander Zverev has won his fifth ATP title of the season at the Vienna Open 2021.What is his rank in the ATP World Ranking?

18) Name the badminton player who would receive the prestigious Lifetime Achievement Award this year from the Badminton World Federation.

19) Which of the following country would host the Men’s Champions Trophy 2029?

The theme of World Children’s Day 2021 is ” A better future for every child.” The theme focuses on raising the voice on the issues that matter to the generation of children and young people and calling for adults to create a better future.

Cabinet Committee on Economic Affairs has approved the proposals by the Union Rural Development Ministry for continuation of the PMGSY-I and PMGSY-II up to September 2022 to complete road and bridge works.

The Cabinet has also approved continuation of the Road Connectivity Project for Left Wing Extremism Affected Areas up to March, 2023.

PMGSY-I: It was initiated in 2000 to provide connectivity to unconnected habitations of population sizes of more than 500 in plain areas and more than 250 in the North-East and other Himalayan states.

The 52nd edition of the International Film Festival of India (IFFI) is all set to kick off with a glittering opening ceremony.

The opening ceremony will be hosted by filmmaker Karan Johar and actor Manish Paul.

This year, the brightest, young cinematic personalities from across India will be participating in the ’75 creative minds of tomorrow’ competition.

The two towering figures of international cinema will make their presence virtually at the inaugural ceremony. ‘The King of all the World’ directed by Carlos Saura will be the Opening Film and this will also be the film’s international premiere.

As many as 55 films across the world will be showcased under the World Panorama Section. The International Film Competition will be adjudged by an international jury with Chairperson Iranian filmmaker Rakhshān Banietemad.

The organizing team has announced that homage would be paid to the lives lost from the world of cinema. Actor Puneeth Rajkumar, who recently lost his life would be honoured along with legendary actors like Dilip Kumar and filmmaker Buddhadeb Dasgupta among others.

The nine-day film festival, being organized in both hybrid and virtual formats, is being held in Goa between the 20th to 28th of November.

The government has signed a contract for procurement of two Fixed Base Full Mission Simulators (FBFMS) for Jaguar Aircraft from HAL for IAF with five years Comprehensive Annual Maintenance Contract (CAMC) at a combined total cost of Rs.357 crore.

These simulators would be installed at Air Force Stations Jamnagar and Gorakhpur.

Under the Atmanirbhar Bharat Abhiyan, India is continuously growing in its power to indigenously design, develop and manufacture advanced cutting-edge technologies and systems in the Defence Sector.

The manufacturing of Fixed Base Full Mission Simulator (FBFMS) by HAL will give a further push to the Atmanirbhar Bharat initiative and boost indigenization of defence production and the defence industry in the country.

The event is being hosted by International Financial Services Centres Authority (IFSCA) under the aegis of Government of India in collaboration with GIFT City and Bloomberg on December 3 and 4, 2021, in virtual mode.

Indonesia, South Africa and the U.K. are partner countries in the first edition of the Forum. Key domestic partners to this year’s Forum are NITI Aayog, Invest India, FICCI and NASSCOM.

Minister of State in External Affairs ministry Rajkumar Ranjan Singh, IORA, the largest and pre-eminent organization in the Indian Ocean Region, is promoting peace, security, and prosperity in the region as well as in the wider Indo-Pacific.

During the Strategic Dialogue on the topic Impact of COVID-19 and perspectives of economic recovery in the Indian Ocean Region, the minister provided an overview of India’s own experience of combating COVID-19 pandemic.

Singh highlighted India’s assistance as the first responder in the region to various countries in the Indo-Pacific during the Covid pandemic and emphasized India’s readiness to share its experience and resources in the spirit of solidarity.

The Food and Supplies Department, Government of West Bengal, has launched India’s first of its kind WhatsApp chat bot dedicated to facilitate the citizens of West Bengal to apply for a ration card, lodge grievances and get access to other critical resources

The chatbot is developed with full-service capabilities and eliminates the need for people to visit the ration office to get their queries addressed or submit requests. The free chatbot is available in English and Bengali.

This will also help the farmers with verified information related to paddy procurement.

The bot is built with resources like ration card application form, tracking application, linking to aadhar, guidance on scheduling sale of paddy and others.

PM SVANidhi provides a collateral-free affordable loan of Rs 10,000 along with an interest subsidy of 7 percent. It was launched by the Ministry of Housing and Urban Affairs on June 01, 2020 to provide affordable working capital loans to street vendors to continue their livelihoods that have been affected due to lockdown.

HDFC Bank facilitates the PM SVANidhi for its Village-Level Entrepreneurs on the digital Sewa portal where vendors can complete the entire process via online method.

HDFC Bank capitalizes for facilitating small ticket loans of Rs 10,000 for vendors along with VLEs to identify the opportunities for other products & maximize their incentives.

Mswipe has announced a partnership agreement with OneCard, a mobile-first credit card company.

OneCard through its ‘OneCard App’ is providing its card users both offline and online transactions, other services such as paying the bill, locking the card, domestic and international transactions

The users of OneCloud are now able to access no or low interest EMIs while availing mid and high value purchases at retail outlets of Mswipe terminals.

The ‘Pay Later offering’ is provided by Mswipe. It will reduce the check-out process by reducing the time taken to complete the process

The senior most judge of Madras High Court, M Duraiswamy was appointed as the Acting Chief Justice of the Madras HC.

According to the Article 217 of the Constitution, the Judge of a High Court has been appointed by the President in consultation with the Chief Justice of India, the Governor of the State.

The appointment was notified by the Ministry of Law and Justice. Justice Munishwar Nath Bhandari, transferred from the Allahabad HC to the Madras HC, will become the senior-most judge of the Madras HC.

TRIFED Aadi Mahotsav is a national tribal festival and a joint initiative of the Ministry of Tribal Affairs and the TRIFED. It commenced in 2017 and is held annually in Dilli Haat, New Delhi.

Mary Kom became the first Indian woman boxer to win a Gold Medal in the Asian Games in 2014 in South Korea and in the Commonwealth Games in 2018.

The Government of Manipur honoured Mary Kom with the title “Meethoi Leima”.

It was hosted by the Abu Dhabi National Oil Company (ADNOC).

The minister visited the UAE on the invitation of H. E. Suhail Mohamed Faraj Al Mazrouei, Minister of Energy and Infrastructure of UAE.

The Minister also inaugurated the Oil and Gas Sectoral floor at the India Pavilion of the Dubai Expo.

On Nov 18, 2021, Defence Minister Rajnath Singh dedicated to the Nation renovated Rezang La Memorial at a solemn ceremony at Chushul in Ladakh.

The Memorial was constructed in 1963 in the Chushul plains, at an altitude of over 15,000 feet to honour the troops of Charlie Company of 13 KUMAON Regiment.

On Nov 16, 2021, The Indian Navy conducted a security exercise, called “Prasthan”, in the Offshore Development Area (ODA) off the coast of Mumbai.

The exercise, conducted by the Headquarters Western Naval Command, is held every six months.

The book is to promote religious harmony between Hindus and Muslims.

It highlights the Ayodhya judgment as an opportunity to find closure on the unpleasant past and look forward to a shared future.

Through this book, Salman Khurshid explores how the greatest opportunity that the judgment offers is a reaffirmation of India as a secular society.

Earlier in May 2018, he announced his retirement from all forms of international cricket.

Alexander Zverev is ranked 3rd in the ATP World Ranking.

In the doubles competition, Colombia’s Robert Farah and Juan Sebastian Cabal beat Joe Salisbury of the UK and Rajeev Ram of the USA to win the doubles title.

The Badminton Association of India (BAI) has submitted 66-year-old Prakash Padukone’s name for this award.

In 2018, he was also honoured with the BAI’s Lifetime Achievement Award.

Alaknanda Ashok, who is the President of Uttarakhand Badminton Association, will receive the Women and Gender Equity Award.

The hosts were selected via a competitive bidding process overseen by a Board sub-committee chaired by Martin Snedden along with Sourav Ganguly, President of Board of Control for Cricket in India and Ricky Skerritt, President of Cricket West Indies.

In February 2025, Pakistan will host the Men’s Champions Trophy.

It will be the first major global cricket tournament played in Pakistan since 1996 when it hosted the Men’s Cricket World Cup alongside India and Sri Lanka. 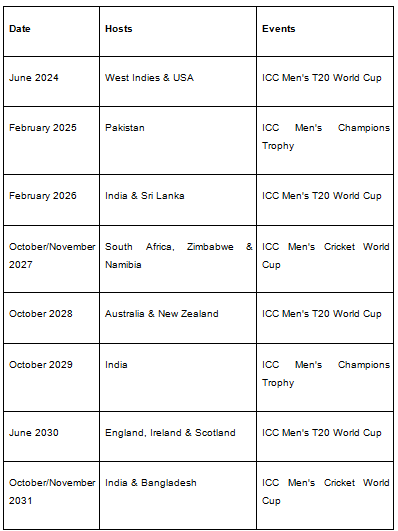