1) The first World Fisheries Day was observed on 21 November,2015.On the same day, the grand opening of the International Fisherman’s organization was held in _________.

2) In which of the following year the United Nations has proclaimed 21 November as World Television Day?

3) The Education Minister Dharmendra Pradhan has inaugurated Centre for Nanotechnology and Indian Knowledge System in which of the following IIT?

4) Name the states and UT where Nitin Gadkari has approved the works on significant National Highways, Roads worth about Rs 3,900 Crore.

(a)Haryana, Jammu and Kashmir and Ladakh

(b) Punjab,Jammu and Kashmir and Ladakh

(c)Uttarakhand,Jammu and Kashmir and Ladakh

(d)Rajasthan, Jammu and Kashmir and Ladakh

5) Which city  has won the title of ‘Cleanest City’ for fifth consecutive time under Swachh Survekshan?

6) India has signed an agreement with which country on resumption of scheduled commercial passenger flights between the two countries?

7) Which edition of Indo – France joint military exercise Ex SHAKTI 2021 has been commenced at the Military School of Draguignan, France?

8) Which company has partnered with National Payments Corporation of India to launch Credit Cards in two variants of Easy and Premier on the RuPay platform?

9) The Network International company has signed an MOU with NPCI International Payments Ltd to facilitate UPI transactions in which country?

10) Google has announced the 7th edition of its Google for India event 2021 virtually. Where is the headquarters of Google located?

11) Who has been appointed as the Chairman of the International Cricket Council Men’s Cricket Committee?

12) INS Visakhapatnam has been formally commissioned into the Indian Navy. It is indigenously designed and constructed by________________.

13) Which state/UT has topped in the Indian Police Foundation Smart Policing Index 2021?

World Fisheries Day is observed on 21 November every year by fishing communities across the world.

It highlights the importance of healthy oceans, ecosystems and ensure sustainable stocks of fisheries in the world.

The first World Fisheries Day was celebrated on November 21, 2015. On the same day, The grand opening of the International Fisherman’s organization was held in New Delhi.

World Television Day is commemorated on 21 November every year.

The day is a reminder of the power of visual media and how it helps in shaping public opinion and influencing world politics.

Union Minister for Road Transport and Highways Nitin Gadkari has approved works on significant National Highways and Roads worth about 3,900 crore rupees in the Union Territories of J&K and Ladakh and the neighbouring State of Punjab, including the construction of Akhnoor-Poonch road on National Highway

The highways minister has approved a budget of 441 crore rupees for rehabilitation and up-gradation work to two-lane with a paved shoulder on Akhnoor-Poonch road.

The work had been approved under Project Sampark (Border Roads Organization) under Engineering Procurement and Construction (EPC) Mode.

The President of India Shri Ram Nath Kovind has felicitated the awardees of the cleanest cities of India at the ‘Swachh Amrit Mahotsav’ hosted as part of Swachh Bharat Mission-Urban 2.0 by Ministry of Housing & Urban Affairs (MoHUA) at Vigyan Bhavan, New Delhi.

The award ceremony, organized to recognize the good work done for Swachhata by towns/ cities, States and Union Territories under various initiatives of the Swachh Bharat Mission (Urban), viz.

For the fifth consecutive year, Indore was awarded the title of India’s Cleanest City under Swachh Survekshan, while Surat and Vijayawada bagged the second and third spots respectively in the ‘more than 1 lakh population’ category.

Singapore and India have reached an agreement on resumption of scheduled commercial passenger flights between the two countries.

Airlines can also operate non-VTL flights between India and Singapore, although passengers on non-VTL flights will be subject to the prevailing public health requirements

The Sixth Edition of Indo – France joint military exercise Ex SHAKTI 2021 has commenced at the Military School of Draguignan, France.

The Indian Army contingent is being represented by a composite team of three Officers, three Junior Commissioned Officers and 37 soldiers from a battalion of Gorkha Rifles and support Arms.

The training so far has focused on aspects of joint planning, mutual understanding of conduct of operations and identification of coordination aspects required for jointly operating in a Counter-Terrorism environment under United Nations mandate.

BOB Financial Solutions Limited (BFSL), a Non-Banking Financial Company, a wholly-owned subsidiary of Bank of Baroda, has partnered with National Payments Corporation of India (NPCI) to launch BoB Credit Cards (in two variants of Easy and Premier) on the RuPay platform.

Both variants of Credit Cards were launched on the JCB International network to support global acceptance.

The cards had various benefits such as 5X Reward Points on select merchant categories, fuel surcharge waiver, pre- and post-purchase EMI offers up to 3 complimentary add-on credit cards for family members enabled by both BFSL and NPCI.

The agreement will benefit Indians, who are visiting UAE by allowing seamless payments through UPI app. Note– In 2020, UPI facilitated transactions in India accounts around USD 457 billion, which is equivalent to approximately 15% of India’s GDP.The proposed implementation of UPI mobile payment solutions on Network International’s merchant

network in the UAE is expected to commence in the first quarter of 2022.

Google has announced the 7th edition of its Google for India event 2021 held virtually.

Google has announced a global-first feature in India that will let users hear search results out loud, the feature will enable people to hear by simply asking Google Assistant to read out the search results.

Google announced its support of voice-assisted bookings for vaccinations on the COWIN platform with the help of the Google Assistant.

Google Search was now enabled to show results in more Indian local languages, especially when a user searches in their language, instead of showing results in English on top

The Board of Control for Cricket in India (BCCI) President and former cricketer Saurav Ganguly was appointed as the Chairman of the International Cricket Council Men’s Cricket Committee.

He succeeded Anil Kumble, a former Indian cricketer who stepped down after serving a maximum of three continuous, 3-year terms.

The ICC Board also approved ‘first-class status’ and ‘list A classification’ to women’s cricket to align with the men’s game.

INS Visakhapatnam has been formally commissioned into the Indian Navy in the presence of Union Defence Minister Rajnath Singh at the Naval Dockyard in Mumbai.

It has been constructed using indigenous steel DMR 249A & it measures 163m in length, 17m in breadth with a displacement of 7,400 tonnes.

This is the first of the four ‘Visakhapatnam’ class destroyers.

It is indigenously designed by the Indian Navy’s in-house organisation Directorate of Naval Design and constructed by Mazagon Dock Shipbuilders Limited, Mumbai.

Karnataka was found at the 14th position with a score of 6.69.

The list was prepared on the basis of a performance review of police stations, carried out by the Bureau of Police Research and Development (BPRD).

Home Minister Amit Shah handed over trophies to SHOs of the top three ranking police stations at the DGP conference being organized by the Intelligence Bureau in Lucknow. 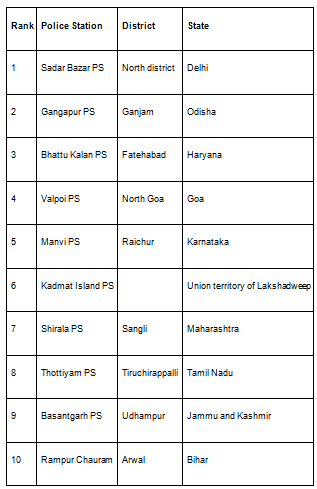 In the 2021 Asian Archery Championships, India concluded their tournament by winning one gold, four silver and two bronze medals, sitting second on the medal tally held in Dhaka, Bangladesh from November 14, 2021, to November 19, 2021.

With this, Lewis Hamilton has become the first driver to have won at 30 different circuits in Formula 1

She is popularly known as ‘Lambi hek di malika’ (the queen of singing in an extended breath).

She became popular across the country after singing the Punjab folk song “Jugni.”